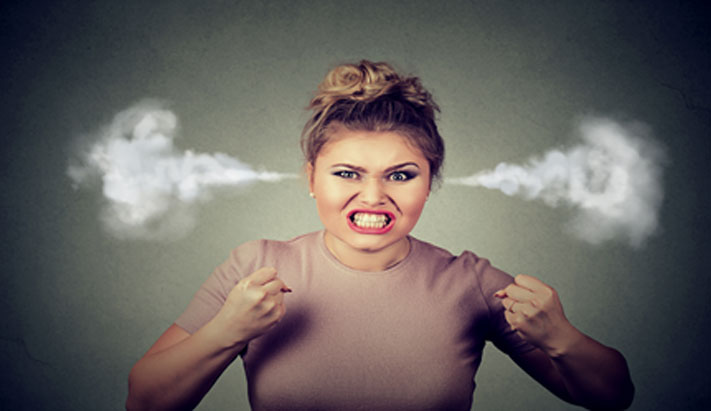 ‘The Grumpy Monthly – the Bitch is Back’

Premenstrual tension (PMT) or syndrome (PMS – Potential Murder Suspect) is a condition that has symptoms that occur just prior to and in some cases during menstruation: abdominal distension; depression; irritability; enema; sore breasts; nausea.  The syndrome has been recognised for centuries as a ‘witch cycle’.

In traditional Chinese medicine, it is called Dragon’s Thunder. Sufferers of PMS can experience a vast diversity in the variety of symptoms that can be involved in this condition in the week or fortnight prior to menstruation. Generally, these symptoms can be divided into five (5) main subgroups that may also overlap one another, each with distinctive characteristics and hormonal links.  The onset usually occurs 4–10 days prior to menstruation and ends abruptly after the onset of menses flow. Approximately 75 per cent of women experience PMS to some degree.

PMS should not be confused with dysmenorrhoea, which refers to pain or cramps during menstruation. Blood hormone pathology of sex hormones may present as being normal; this may suggest that many of the underlying causes of PMS link to an abnormal response of central neurotransmitters and receptor function to these transmitters is not functioning properly (e.g. GABA abnormalities).

The cyclical characteristics may include:

GABA calms and relaxes – it helps you to feel more uninhibited, social and interested; Dopamine (the feel-good hormone) affects the frontal brain cortex involved in mood and behaviour regulation. During stress the sympathetic nervous system dominates. The over output of cortisol from the adrenal gland affects the amygdala part of the brain involved in experiencing emotion and the hippocampus involved in stored memory.

Anandamide is a neurotransmitter produced in the brain that binds to THC (endocannabinoid) receptors and is called the “Bliss, joy molecule.”  Anandamide-AEA can be found in chocolate. Pyroluria or pyrroles is a metabolic disorder that causes an over production of kyrptopurroluria that can manifest as mental and behavioural conditions.

2) PMT-C or PMT-Craving: This group shows symptoms of increased appetite; sweet craving; headaches; fatigue; acne flares; dizziness; or fainting and heart pounding. Biochemically, they seem to have an exaggerated insulin response to carbohydrates as well as decreased synthesis of prostaglandin PGE1. Magnesium deficiency may also be present. Increased carbohydrate tolerance, low progesterone, and increased PGE1 levels.  Insulin resistance can cause you to feel Hangry (hungry + angry).

Beyond hormonal imbalances there are multiple reasons why people can feel depressed:  years of frustration that has collapsed in on them-selves; is it situational or circumstantial; possibly having a history of allergies has lead to the drainage of your vitalistic energy are example. Depression is not a deficiency of taking enough SSRI and psychotropic medications. It’s not a one treatment fits all approach.  NAD – Nature Deficit Disorder – Get back to nature and get plenty of sunshine.  Exercise or Exorcism – whatever works!

Men be afraid, be very afraid…you can run but you can’t hide…?

Super PMS is a severe, disabling form of PMS. In PMDD, the main symptoms are mood disorders such as depression, tension, and persistent anger or irritability. Women with PMDD usually also have physical symptoms, such as headaches; joint and muscle pain; lack of energy; bloating; and breast tenderness.

The majority of symptoms that are associated with PMT are due to hormone and nutritional imbalances. The female hormone oestrogen has been found to be elevated in the late luteal phase of the menstrual cycle, reaching its maximal point 1-5 days before menses. By contrast, progesterone in PMT shows a reduction in the mid-luteal phase, reaching its lowest relative deficiency 5-10 days before menstruation. Other studies have implicated increased levels of follicle-stimulating hormone (FSH), aldosterone, and prolactin.

Elevated oestrogen-to-progesterone ratios have been shown to contribute to premenstrual anxiety, irritability, and depression. Elevated oestrogen is known to interact with brain enzymes to cause an elevation of adrenalin, which is known to trigger anxiety; with noradrenalin, known to promote hostility and irritability; with serotonin, which helps cause nervous tension, fluid retention, and the inability to concentrate.

Dopamine, which is believed to balance the effects of these three amines by enhancing relaxation and mental alertness, is found to be at reduced levels. Studies have shown that the highest number of accidents, suicide attempts, and violent crimes committed by women occur in the premenstrual period 4–7 days prior to menstruation. Other problems may include sexual dysfunction, weight fluctuation, akathisia – a condition causing restless and an urgent need to move, impatience and possible feeling of doing harm to themselves or others.

The symptoms of PMT show a striking similarity to those associated with the loss of activity in the thyroid gland. Giving thyroid hormone replacement has been found to relieve many PMT symptoms. Some of the features of PMT are also similar to the effects that are produced by injection of Prolactin.