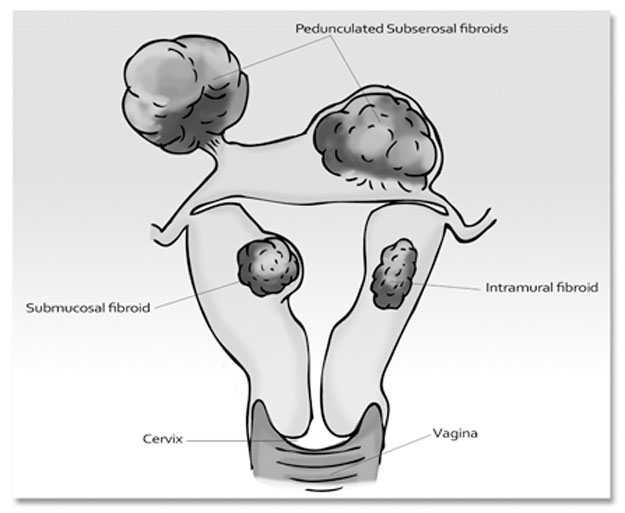 Uterine fibroids (also called leiomyomas or myomas) are benign (non-cancerous) growths (tumours) that can form on the interior muscular wall (the myometrium) as well as the exterior of the uterus. Fibroids are abnormal muscle cells and depending on their position within the uterus determines what they are called: submucosal (protrudes into the cavity of the uterus), intramural (within the uterus), or subserous (forms outside the uterus, subserous fibroids are usually small and don’t normally interfere with fertility).  There may be more than one fibroid present and are usually detected during a medical pelvic examination. Myomas that are attached via a stalk in the uterus are referred to as pedunculated.

Fibroids are becoming extremely common, in the USA only over 3 million women are diagnosis every year and 80% of women may develop some degree of fibroid formation by the age of fifty.  Exposure to more genetically modified foods and compounded also by multiple source environmental toxin overload and pseudo – eostrogen exposure are all contributing factors to the increase of these tissue growths.  Approximately 20 to 30 per cent of all women are estimated to develop fibroids predominantly during their late thirties and early forties, and then shrink (atrophy) after menopause. More than 50% of women will develop fibroids before 50 years of age. One of the possible culprits to their formation is suggested to be caused by excessive oestrogen during this stage; there also appears to be some link to a genetic predisposition for fibroids to develop as well. Many women with fibroids have been found to have elevated levels of human growth hormone. During pregnancy fibroids are also known to potentially increase in size. About half the women who have fibroid tumours are free of symptoms. Others may have abnormally heavy or frequent menstrual periods.

Some of the associated signs and symptoms include: anaemia (due to heavy bleeding); fatigue; weakness; bloating; cramping; increased vaginal discharge; clotting; pain and/or bleeding with intercourse; and break-through bleeding at times other than during the period. Fibroids can potentially affect the progression of sperm entering, or movement through the uterus.

If an ovum is fertilised, having fibroids may also hinder correct implantation to the uterine lining. When fibroids grow larger than 6 to 7 centimetres in size this may cause a diversion in blood flow and potentially cause hormonal changes. If an embryo happens to implant onto the uterine lining, the changes that may be caused by the fibroid can potentially hinder the proper formation and attachment of the placenta, and restrict adequate blood, oxygen and nutrient supply to the uterus, thus affecting the viability of the forming embryo.

Many women that I have spoken with who have had troubles conceiving say that they suffer from poor circulation, cool hands and feet. An extremely large number of these women were also diagnosed with fibroids and/or endometriosis; possibly a significant link?

A very common cause of female infertility is the blocked or partially obstructed fallopian tubes. Blockages of the fallopian tubes can be caused by appendicitis, endometriosis, peritonitis, (inflammation of the membrane of the abdominal cavity), Pelvic Inflammatory Diseases (PID) and Hydrosalpinx (stuck fimbriae).  The tubes may also be blocked due to excessive mucous production.

Scar tissue and adhesion can also be a result if left untreated and can obstruct embryo implantation. Scar tissue and adhesions are usually a consequence of previous pelvic infections eg chalmydia or gonorrhoea; complicatiotion from IUD’s; dehydration; surgery; ectopic pregnancies – when a pregnancy occurs in the fallopian tubes – are at a much greater risk due to this condition and arepotentially very dangerous, if not life threatening, if not detected early as the tube can rupture – the pregnancy is unlikely to be viable in this case.

If the tubes remain blocked, the ovum when released can be obstructed as it tries to travel through the tube to reach the sperm and vice versa.  An ovarian torsion (twisted around its ligamentous supports) may occur from vigorous intercourse that can cause severe and sudden abdominal pain.

Medically, this blockage may be diagnosed via a dye flush through the tubes during a laparoscopy procedure or a sonohysterosalpingogram. Blockages can also affect the tubes’ patience, i.e. the tubes may begin to pulsate in an inappropriate spasmodic manner. The cilia that line the inside of the tubes work by washing the sperm and egg together.  Their function can also be affected or there may be even damaged because of the condition.

Poppy seed oils solutions have been used by gynecologists to help flush blocked fallopian tubes.  Chronic stress is also commonly linked to tubal obstruction.  Surgery or sclerotherapy. may be required to try and remove the obstruction or remove of damaged tube.

Tubal ligation is a female surgical sterilisation procedure involving having the fallopian tubes tied. A tubal reversal or tubal reanastomosis involves a microsurgical procedure to undo the blockage. Many factors may need to be considered before undergoing this reversal procedure.